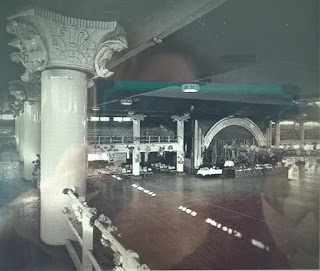 I wonder if you can imagine this space filled all the way around with a circle of pairs dancing. Sometimes there were so many people there that there needed to be 2 circles. It was a marvellous place.

I was surprised and delighted yesterday when my Darling Boy arrived home from school with a wee stolen flower for his Mum and when he slid it behind her ear I was filled with all the joys of spring. It was such an oldie worldie thing to do. Ahhh

And then he told me about the boy - girl dance classes they were having at school and I was transported back to a simpler time, when on a Friday evening a little herd of us would make the long trek from Wynnum up to the Big Smoke, Brisvegas to dance up a storm at the now long gone iconic CLOUDLAND.

Yeh there was the usual jumping around and flinging of arms and long permed hair, type of dancing but there was also the Progressive ballroom type of dancing where you'd waltz around or Pride of Erin about and get a look at all the fellas there. Yep it was a different time. A time of innocence - Shit I am starting to sound like a Simon and Garfunkel tune. There wasn't a fear of being slipped a ruffie or an E tab and it was not a place for drunken louts. People just came to dance and maybe meet up with someone interesting. I never met anyone I wanted to see again, but I sure as shit loved that twirling all around the cavernous hall.

My Grandie said that some of the boys were being idiots cos of 'girl germs' but that he was enjoying it.

Then I told him a yarn about how much many people enjoy a fella who can dance. And I told him that my lovely Dad taught me to dance the old style jig and that dancing with a fella who knew what he was doing was one of the highlights of my dating life.

I was at a dinner dance at the Gabba Cricket Grounds - no not out on the pitch, but in a huge function room which may or may not still be there. It was a very formal 'DO', Black Tie and long frock and high heels, and coiffured hair.  I don't remember my date's name, but I sure do remember being dressed to the nines and having him dance me all around the floor. As soon as I trusted that he knew what he was doing, and I allowed him to lead, the dancing was just bloody marvellous. Yeh I knew what I was doing, courtesy of my Dad, but that would have been of no use whatsoever if he hadn't had a clue. I put aside my 'I'll do it myself ' persona and let him be in charge, and even though I don't remember his name I can remember how good it felt to float all about the dance floor. Yeh I do love a bit of a dance.

Yesterday, I was quite taken with the idea that amid the computers and the social media storms and all the modern technology, there is still space for simple things like old fashioned dancing.

And then he told me of the fun he was having in another class - maybe PE or maybe Drama or Dance who knows, where they are choreographing a modern abstract dance performance and when he demonstrated a bit of the CRAB dance, well let's just say I laughed up a lung and was pleased I was already seated. I am hoping that there is not much similarity between this Crabbing and his waltzing but the balancing of it all makes me smile.