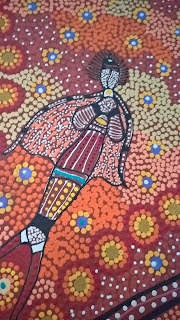 Live and let live I reckon. So long as it's not hurting anyone or even inconveniencing someone, then seriously I reckon you can just go your hardest. And no I am not gonna go on about the fucking expensive, non binding, postal poll about Gay Marriage, cos I just don't get the controversy about this. Yeh I know I have mentioned all this before. Nah I am talking about folk, mostly women but also men, who take their faces along for some wee injections to ease the age and make them feel better about themselves. Yeh, go your hardest I reckon.

But today rather then popping in to a candle lit, sweet smelling, calm, gentle music streaming, salon for a good needling, I found myself in my doctor's rooms along with a veritable herd of people. Dr Meena had told me to call up any time and make an emergency appointment, for the savage digging if my mind started exploding with migraines again, after we agreed to experimentally part ways last November.  I was sitting there and not getting even the least bit cross about how long it was gonna take, cos I realised that by my being, there someone else was gonna be running much later than they had planned on, cos I was a 'Fit in', so I played some games on my phone and kept my head down.

What I did quickly glean while I sat there, was that it was Botox Day. And so as folk wandered in and out, I curious about their ailments.

Dr Meena is a thorough specialist. She likes to make sure she is crossing all the Ts and dotting all the Is. But once she has decided that the Botox injections are the way to go, she goes hard and fast. Diggy diggy dig dig, and all the while she is chatting away and I am breathing like I am about to push out a 10 pounder. I bleed and she wipes up and continues to chatter and jabs in more than 30 sharps. Ouchie indeed.

It's a long way from pretty making, but hey there is not something too attractive about being head down bum up chucking into the loo, so I guess beauty is definitely in the eye of the beholder.

But back to why the others were there.

I reckon the woman who wandered in just before me might have had an exploding head too, but from conversations earwigged, one bloke was being jabbed for help with Parkinson's disease tremors and another for Cerebral Palsy. I rather doubted that either of these people were gonna dance on outta there, but I hope that there might be an improvement at least. Are you wondering about privacy here? Me too but that's another post I reckon.

There are lots of things that are getting a bit of a Botox tickle if you ask Google. Cross eyes and even stinky BO arm pits. Bloody remarkable stuff huh?

Fingers crossed for us all, cos the needles are not for the faint hearted.