Admissions of a TV addict. 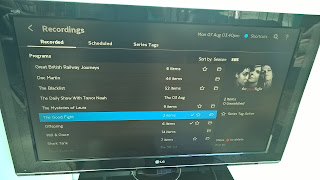 So while I wait and wait and wait til WILL AND GRACE is back on the tellie in September, I have been diving in to the era of the Reality, and again I am thankful for the recording part of my Fetch TV box. Yep that's what Optus supply to folk because their internet is so appalling that they need to get punters addicted to some other part of the deal so they don't kick off too much about an internet speed of less than 5 when much much fucking much faster is possible from Telstra. But the Fetch Box does allow us to record stuff and then watch it on speed dial - no ads and no repetition for idiots - you know 'Coming up.....and then after the ads a recap of what you have just watched twice! I reckon the directors of modern Reality shows must look at regular punters with utter disdain, cos they clearly reckon we have an attention span of less than 5 minutes and a short term memory span less effective than a gold fish. Or maybe they are on such a tight budget that they have had to work out ways to make 10 minutes of footage elastic enough to fill an hour slot.

Marco going off like a rocket in his little kitchen, plays while we have dinner,  while we record The Block, (although truthfully we only get interested in the 'grand reveals') and Australian Survivor - this one is my favourite. I have been watching this game on the tellie since it started, all those years ago. I like it cos very often stuff happens that is difficult to predict.

And I am happy to say that that Bachelor show where the women wear other people's clothes with the swing tags tucked in so they can be returned for a full refund, and they bitch about each other and the nastiest cow gets the most air time, and some bloke has all the power, is not on the radar. No judgement if you are watching, I just don't get it.

But we stumbled across 'The Good Fight' Wed 8.30pm SBS. This is a spin off from 'The Good Wife' which I thoroughly enjoyed. And after the first 2 episodes, I am hooked again. There's some of the old cast and the legal stuff continues. If you liked The Good Wife you might like to give this one a go.

And of course then there is my dirty little secret, 'Suits' which I record and watch on the sly cos Stevie is just not interested. I must admit though that as the Optus internet is becoming more and more inconsistent, I have missed the last 2 episodes - well parts of 'em anyway. And the skip and jump and now you see it and now you don't, recordings have beaten my patience. All the while Optus tell me that I should be thankful for the 'service' they provide - well that we pay for, cos well it's excellent! Just ask the person at the call centre in fuck knows where. 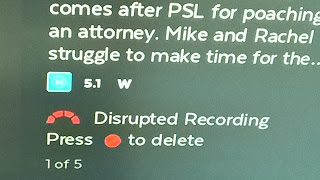 In any case when the tellie is behaving there is stuff showing that I am finding entertaining.

How about you? Have you signed up for Stan or Netflix or some other Pay TV?