The Holidays are romping towards the Big House. 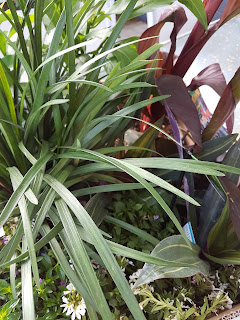 Here's some of the box of plants that My Girl is gonna transform .....

It's been a whalloper of a week! Not like in times past, with the speed and madness of single motherhood, teen rearing, school marm, householder, cos that was a kind of busy that I can now, barely even contemplate. Nah my NOW busy ain't like it used to be.

I remember limping across the end of term finishing line, where if I was lucky there'd be no marking and maybe a bit of money to shout My Girl and me a bit of a blow out at the beach or the shops or something else fun fun fun. The madness would grind to an instant halt and PJ days vegging on movies and pancakes, were not out of the question

But back to this week. I did battle with the all too often mongrel whalloper truck relays up and back to Brisvegas, twice, once on my usual Tuesday to see the kids and again on Thursday so I could be very proud Ma at my Darling Boy's Tae Kwondo Grading. Just as an aside, am I the only one to notice the increased aggression from the truckies now that there are signs going up about how, come August, they will need to stay left, so there will be no more boy racers on 32 wheels, in the fast lane, but in the mean time, they are all over the road? Really am I the only one to notice?

I filmed just about the whole Grading and he was bloody brilliant - I admit that a couple of times, even though it was against the rules, I lost control and let out a few woop woop woops, especially as he slammed those thick boards, firstly with his hand and then with his foot. Brilliant!and he was so chuffed with himself when he was finished, Ahhh,  but not so euphoric that he forgot to ask me not to post any photos of him here. Yeh he's become shy. So you'll have to take my word for it about just how damn fine he was.

And then in preparation for the Kids' arrival on Monday, cos my Girl has offered her expertise in the garden, Stevie and I wandered around the garden centre - not being even close to expert, we were just guessing what might be ok. We got a bunch of stuff and now I am hoping that my girl will be able to simply transform my fish pond and help me to fix up the rest of the garden.

But this doesn't excite my Darling Boy really. He's not all that keen on yard work. He's got a plan to do some cooking while he's here. And he's been charged with finding a recipe for his very favourite, Chicken Parmigana. I have never cooked it but I reckon I can have a good guess about the ingredient list, so this is also on my prep list.

So the tireds hit like a brick today and my feet have been up and the tellie is working overtime, in preparation for the fabulous onslaught.

The holidays are now a time of noise and activity, and a bit of chaos. Yippee!

I have said it before and I'll say it again, I am so very lucky that I get to be Ma for the hols. I know lots of grand parents sometimes feel that their babysitting duties become a bit of a chore, but I am not ever gonna whinge about it. He's now the tallest in the family and I am just pleased that he's still happy to pay his old Ma a visit.