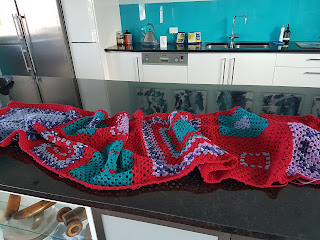 This is the culprit, the cause of the ache in my everywhere.


About a month ago I thought I'd have a little go at some crochet, I think I have mentioned this already. In any case, I bought up some wool and started and the thing is that as too often happens, the wee project has grown like topsy and now after many hours of stock still except for finger action I have a long long shawl thing that I am still managing to control and design and the most appalling pain across my back and shoulders and neck and into my head.

This all started out slowly enough and in my usual casual, blame it all on the meds manner, I just hoped it would go away, like the occasional skin flare ups or the belly aching or the bone pain or the other shit that goes along with the meds.

But this little unpleasant addition to the usual, well it just didn't go away. And it soo didn't go away, in fact it just got worse and worse, and so finally I figured that a little visit to Dr Jane was in order, but as luck would have it she was away on a holiday and I took that as a sign that the pain would just go away.

But it bloody wouldn't budge. Bloody stubborn shitful thing! Seriously if the mould in the bathroom was this bloody minded you'd have to sell up and move on.

So I popped off to see Sylvia the Therapeutic Massage woman at the physio place I go to.

I have seen her before. I like her cos she doesn't think it's odd that I bring my own coconut oil and just enjoy a lie still and a if I am honest, a little ZZZZZ off while she goes gently about her business. If I spill a little pile of spit onto the floor through the head hole, well she doesn't seem to mind that either.

But on Friday I went there and told her I was in a bit of pain and she had the usual furtile looking at movement restrictions and such like and then she got down to business.

She still used my coconut oil but that's where the similarity of the relaxing visits of yore ended.

She thumbed and elbowed and poked and prodded. I grunted and breathed and panted like I was having a baby, and not wanting to appear too whimpish, I only occasionally let her know that I was in serious pain. She giggled and regaled me with the noises other folk make when they are in pain.

I admit now that I don't give a shit what other noises fill the room from people who are hurting.

Because I was having a little bit of a cry my nose got all blocked up and so my breathing was all in and out of the mouth which was just as well cos otherwise there could have been a very big wet patch indeed on the carpet under the head hole, as it was there might have been just the teeniest little drip of snot involved.

When my hour was up, I was grateful.

I was disorientated and when I got home Stevie reckoned I looked like I had been 10 rounds with Tyson, except that my ears were intact.

We grabbed a burger for dinner and part way through I had to trundle off to find a planter stand cos a wave of nausea hit me like a brick.

And now, after a couple of days, when I thought perhaps all the pain from the massage might have done the trick, I am still just one big ache, and even with Stevie's colour blindness he can see bruising points all over my shoulders and up my neck.

So I am aching on the inside and on the outside. BONUS!