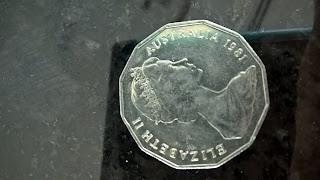 This is as close as I could come to a pic of Bessy. She looked pretty fine back in 1981! Well she still looks pretty good I reckon.


It's the Queen's Birthday weekend, even though her actual 'cut the cake and get mullared on anything alcoholic' day was way back in April. Yeh we Aussies are so laid back we are horizontal when it comes to blowing out the candles with our Queen. But I digress.

We got up late-ish, well Stevie did anyway cos I was up at 5am washing sheets and kicking myself cos I couldn't sleep in til 12 like I used to do, - well never did actually, except that I sure as shit would like to.

By the time he was up, I told him it was afternoon tea time, more than just a little hyperbole cos really it was only just passed 9.30am, but I had been up forever. So we went across the village for breakfast and it was heaving. Avril had upped-sticks for the holiday so everyone was at The Duck's Nuts. It felt quite festive. Breakfast was delicious and Dog was happy as a pig in shit cos she got plenty of leftovers.

We ran into Dog's best friend, Sam, in the park on the way home and they had a very controlled little play cos he is going in for some major surgery on his leg tomorrow. He's a very sore boy and neither of them understood why a park gallop wasn't possible. They sat under the tables on their leads, and every now and then, thinking we weren't paying any attention, they'd go at a bit of a wrestle, until we pulled 'em back into line. We all hope that the lovely Sam will recuperate quickly and that shenanigans can be on once again.

While we sat and caught up on our news, the rain started tumbling down. I love lazy afternoons - well let's face it, all my afternoons are lazy cos I am a lucky bitch, when the grey seems to wander inside.

We got out the Monopoly card game and had a few hands. Stevie would agree that I am indeed a lucky bitch cos the cards really fell my way, and then he thought he'd put together some puzzles that had been calling out for some time. 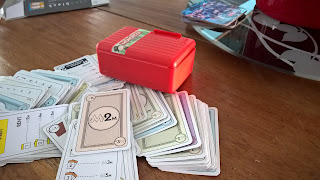 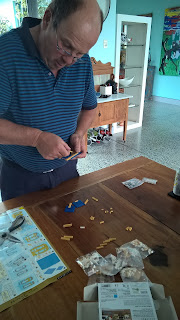 The pace of the day has been slovenly, ah bloody marvellous.

Beds need to be made, but all the washing after our visitors has been thrown through the machines, and so the short week can start with all the shit jobs behind me. Ah, that means it's OK to be a lazy cow for the whole week. Yippee!

How have you spent the lazy long weekend?
Posted by Unknown at 14:23