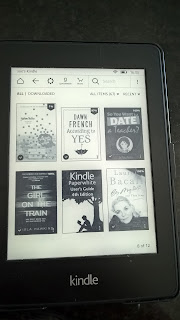 What a random collection of books on this page? Top right is the book my friend Pinky Poinker wrote and it's worth a look for a giggle. Dawn French has never written anything that I haven't loved, Lauren Bacal - what a woman!


I downloaded and read, 'The Girl On a Train' when it first appeared on the best seller list. Now that's not how I fell upon it cos I am not privy to all that hoopla, so I must have seen something about it on social media, and as I nearly always have my nose stuck in a book and because it is so ridiculously easy to get a book delivered to your Kindle, I ordered it and then there it was waiting for me to imagine.

Anyway, I just fell into the chapters. The characters and the places all appeared in my head and I was too often a big old scaredy-cat, pleased to be able to close up the Kindle and put it all away before the nightmares stampeded into my head, cos god knows I already have enough trouble sleeping. The 'Who Dun-it' was pretty long and drawn out, perhaps mostly cos likable characters are a bit light on the ground. Yep I enjoyed the read, and I loved the way my imagination ran rampant. I feel more than a little sorry for those literal, black and white, real or fake folk.

But it might be exactly these folk who drive the making of best sellers into movies, long before the readers' memories are even slightly dimmed.

There has been quite a lot in social media this week about how terribly plain Emily Blunt is in the movie, and given that she played a tortured alcoholic that shouldn't be too much of a shock. She did a good job living up to my imagination. All the crap written criticising  Ms Blunt's appearance seemed to be off on an irrelevant tangent but that's just my opinion.

The cast did a pretty good job but if I have any complaint it might be that everything unfolded too quickly and so the tension was a bit lost. Of course it is entirely possible that having read the book, there was just never gonna be too many surprises, well none in fact. I mean what the fuck did I expect really?

So truth be told, I was happier and more frightened and upset and worried and relieved when I read the book than when I watched the movie, but if you haven't read the book, pop into the pictures to have a little look see and let me know what you think.

It is probably always wise to see the movie before you read a book, especially if you have a vivid imagination cos then you can sit back, self satisfied in the knowledge that what played out in your head was better than in the movie and therefore you should make a bee line for Hollywood and take up directing - well maybe not?