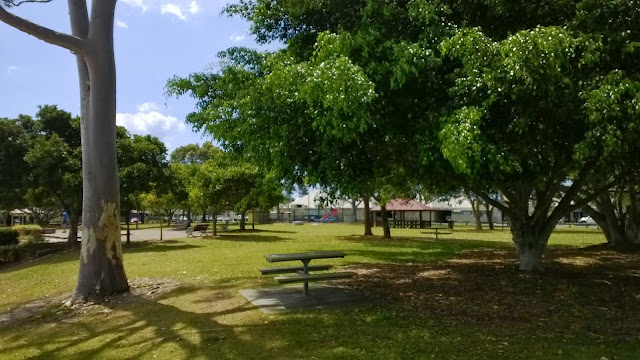 The park next door is a pretty good neighbour. Mostly she is pretty quiet and asks for very little from me, in terms of effort to maintain the gardens or the trees or the grass, unless you count the calls I make to the council to ask for a bit of a hair cut or to tell them that it’s time to kill the bindis before they flower. She is a well dressed and carefully coiffured older woman who watches over a broad spectrum of society. I reckon we could do worse than ask her about the general state of play in the suburbs.
Almost every weekend one or both of the rotundas are commandeered to house the screaming delights of children at birthday play. Balloons are strung and food is spread and kids play and my dog runs amok if I let her out amongst it all. Generally all this goes off with no inconvenience to me, but last weekend some overindulgent soul thought it necessary to erect a noise making, generator driven, gaudy jumping castle. I could only suppose that this was the so no adult would be called upon to actually play with the kids. The hired help supervised the jumping and the adults enjoyed a chardonnay. The silly party games of my youth and those that I used to play at my girl’s parties seem to be sadly a thing of the past. I miss them and I bet if modern kids knew about them they would pine for them too.

There is a 20 something couple who take up the position on one of the garden benches, every morning. They cuddle and sit transfixed by each other. I just wonder why they are not at work ( they could wonder the same about me) or  if they are having an affair and have nowhere else to meet, or if indeed they are drug addicts just sleeping off the morning in the sunshine soaking up a bit of free vitamin D. They are a bit grubby so I am only guessing and it could well be my middleclass-ness that is influencing my thinking. They do no harm and Dog just ignores them. She seems to know that they have NO interest in playing with her so she leaves them well alone.

It’s an off-the-leash dog park so dogs of all shapes and sizes get about. Generally it is all quiet on the western front, although there have been instances of aggression and unpleasantness, but that is mostly when owners are having a bad day or are just unpleasant bullies. Idiots have been seen threatening others and yelling in a frenzied way but this is far outweighed by the development of strong friendships and the exchange of local gossip.  What does beggar belief is the number of dog owners who do not clean up after their animals. There are bags aplenty and lots of rubbish bins, but still some folk find it beneath them I suppose to bend over and scoop up a bit of dog shit. It does lack dignity, but it’s all just part of owning a dog. It has been known for me to yell out and let Mum or Dad know that a baggie is needed and then stand point until the shit is cleared away. Rather self serving really as I can live without slopping my thong into a steaming pile of pooh.

This morning however, the tranquillity was disturbed by MIKE. Three young brothers were in the play gym area while and mum and step dad watched on. There was a scuffle between the boys as there so often is and one gave another one a bit of a clock around the head. There was some crying and a sook to mum and then the smacker became the hunted as Mike chased him around the park yelling at him. The kid was terrified crying, ‘Don’t Mike. Please. I said I was sorry. Don’t. Please.’ Well Mike caught him and threw him to the ground and started belting the poor bugger. He hit the kid around the head while he sat on top of him. I felt like someone should step in except that Mike was out of control, clearly shaking with rage, and there could have been no guarantee that he wouldn’t turn on you. Now in the calm aftermath I feel like I should have said something. The poor kid! I wonder how many people would have interfered.

Old folk, young people, kids, dogs, workers on their breaks, black white and brindle, meeting in the park and for the most part just rubbing along happily together. She is a lovely old girl, that neighbour we have.