Cars are really only a necessary evil. I have no interest in them. I don’t recall ever being impressed by the car a fella drives, except perhaps when my high school beau picked me up for the formal in his very own baby pooh brown escort. We arrived, with it spluttering and smoking, while other kids were being dropped off by mum and dad’s taxi. It was a dangerous rust bucket of a thing and in retrospect I am surprised my father ever allowed me to get in it, but it was a hoot being independent and carefree - the memory of the exhaust fumes and lack of seat belts not withstanding.

I have owned surprisingly few cars in my life, certainly compared to most people I know. 2 whilst I was married – a Datsun which we bought new, which we called Friday afternoon, cos it had so many idiosyncrasies like the horn blasting every time you turned left, that it had to have been assembled in a big hurry by oafs more interested in getting pissed and trying to cracking on than building a precision instrument. It was a very pretty blue colour though. The service department men would just cringe and hide behind the oil drums when they saw me coming with no doubt yet another weird problem which was just beyond their area of expertise. Soon we tired of its madness and bought a Toyota also new, which I managed to smash the shit out of when only a month old....yeah, ooops, big ooops.
When I got divorced – possibly not related to the smashing of the new car, I didn’t get custody of the Toyota so with the dubious help of the guy from the credit union, I managed to buy a 20 year old automatic  toyota which was built like a brick shithouse and went about as fast. I reckon in his most casually sexist way he thought this was a perfect fit for a woman, safe and reliable and crash resistant.
Belly and I really grew up in this car – NOG we called her. We went everywhere and it was truly reliable. It carried kids by the car load to kiddie places and then became the venue for sex and drug education as it filled with girls on route to the high school dances. The girls would hope out chanting the mantra of the day, like ‘Never leave your drink unattended’, and then go off and do whatever they wanted in true teenage fashion.
By my late 30s NOG was dying a very slow death. We had tried all manner of resuscitation but it really was to no avail so she slid into the murky world of spare bits and pieces and I got a new Ford. This gal was lovely and smelled new and was manual and had airconditioning and power steering and a radio that worked! Like all my cars, she was blue too, well perhaps teale, but blue green.
When I arrived in London I thought I would manage without a car and that idea lasted about 3 days. I found a fella who knew a fella who knew someone who was selling a white car for 300 pounds – quite a bargain. So I bought it, insured it, registered it and drove it like a crazy woman all over southern England. It used about as much oil as it did petrol but she sure went like the clappers. While I was off in Greece, Belly was unlucky enough to be rear-ended in it and the petrol tank was punctured so the car had to go off to the big car shop in the sky.
The same guy’s brother helped me out with another car but this one was less, well less everything really. It had a piece of timber for the drivers’ window and blew smoke so badly, that one night driving back from the theatre, it just blew up and I had to leave it by the side of the road. I did of course remove all ID before I legged it home because it was an ‘illegal’ – no registration no insurance and given the state of it, no MOT. I loved driving this car. I had become some crazy sort of villain parking anywhere and laughing ruefully at all the parking fines. I used to post them home with a view to wall papering a small room with them. Yeah I know.... it was wrong!!
When I moved in with Steve, for the first time in my life I had a car that was just for me. I didn’t have to worry about driving kids places and as he had a big car I didn’t have to worry about boot space for weekend luggage etc. She was a blue Ford convertible and she went like a shower of shit so long as you weren’t stuck in London traffic. I thought very seriously about bringing her back to OZ but the paper work was a killer and it really is too hot in Queensland for a convertible anyway.
Now I am on to my second blue Mazda. They go well and are comfortable, easy to park, and quite famously can transport a whole bath if you happen to be building a house.
This girl is only 6 months old and as a result of my being busy being unwell, has not gone many kilometres. I only mention this because it seems to be a scam that the car dealers insist on 6 monthly servicing whether it needs it or not.
I wish these people would just bugger off and stop trying to bully me into giving them money for old rope. It’s a car for god’s sake not an invalid relative! It’s just a car. 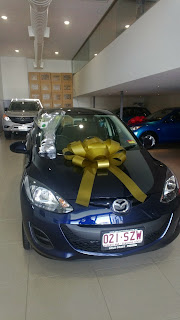