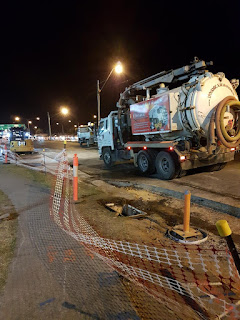 Here's last night's 'work' and today NOTHING. Quiet during the day, all hell breaking loose at night.

'I have dealt with you before!'

Well what could this possibly have meant?

If it was cooed to you by your Pizza Shop owner, then you know that they recognise your voice and they know that you want a No. 5 regular with NO CAPSICUM. And all is well with the world, cos these folk make bloody marvellous Pizzas and there is never a dot of the red yukky stuff on 'em. I like it that they have 'dealt with me before'. It'd feel comfortable and cosy and just a little bit special.

When it's stuttered by the car mechanic place I can only imagine that they are a little nervous, because they know that even though I have been telling them for 10 YEARS to stop emailing me and texting me and calling me to tell me my car is due a service, they have never listened and they have emailed and texted and called me and this time wrote to me snail mail too, so they are waiting for me to go off a bit like a rocket. The whole slick as shit showroom type place staffed by people who haven't a clue about the actual running of your car, well it just gives me the shits. I'd much rather chat to a grubby person with a grease smeared face who has been up to their elbows in my engine, than some tosser in a suit, who wants to impress me with their ability to read the written word and take my money. The suited and booted and the flash 'grab the money' centre, just all adds to the cost.

Yeh sometimes 'I have dealt with you before', delivered in a whisper almost under the breath indicates a modicum of fear or perhaps utter boredom with having to get on the bloody merry-go-round with this crazy cow again.

But what about if it was shouted at you across the street by a person in uniform, who perhaps, because they were waving about a red light, Darth Vader wand and who seemed to be deluded enough to believe that they are all powerful, the omnipotent traffic controller in a Queensland Police uniform, what about then?

I looked back at this woman who was directing traffic, who  was perhaps also charged with stopping said traffic so pedestrians might more safely make their way, and sure enough it was the woman who had grabbed me and shoved me about and questioned my sanity one rainy night about 7 or 8 months ago.

I have not looked this up, but is part of the police mantra to PROTECT AND SERVE?

She saw us and ignored us, made no moves to stop traffic so we could safely cross the road, and so being 2 reasonably able bodied souls, we took it upon ourselves to walk across the road when it was safe to do so.

Yeh, we looked Right then Left then Right again. Except that we really only looked right cos we were only going half way across and then we looked left and walked.

Well that gave the god like one the shits didn't it. She started shouting at us that we were foolish, that she 'had dealt with me before'.

I asked if we were gonna be arrested again for crossing the road too slowly and Stevie just told her to piss off.

She fancied that we were gonna grant her all sorts of power, that we were gonna stand there on the side of the road like a pair of gormless fools, and wait for her to tell us that it was safe to cross. She thought we would only walk across at her behest.

Yeh her 'I've dealt with you before' was supposed to be a threat.

Yeh the noise has started up again.

Work that could and should be done during the day is going ahead all night.

Last night it drew out half a dozen locals. Perhaps the coppers need to send out more paddy wagons tonight cos the noise is supposed to be ongoing til Friday.
Posted by Unknown at 12:01