Does Pinocchio have a wooden dick? 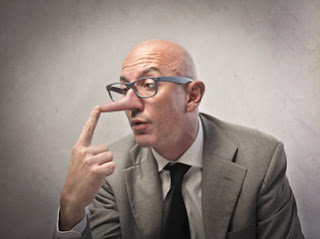 I am wondering just how many ways there are to call someone a liar.

And I guess that depends on a number of things:

As a relatively polite person - nah don't fall about laughing and snorting back your friday bevvie, I try hard to keep my blood pressure on a an even keel and so go slowly into rude escalations.

So if I am doubtful about the veracity of someone's yarn, then I might say something like, 'Really?...Really...I wouldn't have guessed that.' Because if I have no solid firm evidence to the contrary I don't like to start up a big angry argument, but I am unlikely to pretend that I believe every part of every syllable that was uttered either.

And of course we are all pretty patient with kids we are fond of who have clearly been kissing the blarney stone, so if My Darling Grandie is spinning some unimportant crap I will just raise an eyebrow and change the subject.

But I don't like it when people lie, mostly cos I reckon people who tell lies do it cos they figure they are smarter than everyone else, or everyone else is stupid. They figure that their lies are OK cos they won't get called out on 'em.

I have fallen out with people over their lies. Sometimes 'Goodbye' is preceded by a heated conversation and a theatrical storm out and sometimes I just float away without explanation cos it would take more energy than it'd be worth.

Oh Really? I don't think so.
Oh Really? That is very hard to believe.
No, that just doesn't make sense.
That's neither reasonable nor rational.
That seems extremely unlikely.
That's a load of old tosh.
That's a lie.
What a load of crap.
That's just utter bullshit.
You're a fucking LIAR.

The question for the afternoon is where do you reckon I am along this continuum in my dealings with Transport and Main Roads Queensland?

It has taken a good while to get my head around their 'bullshit dispensing', cos I mean really who readily can believe that public servants would deceive and bend the truth rather than be honest and who can believe that they do this knowingly because they are party to departmental processes. Yep I reckon they are told to be deceptive. They are told how to be deceptive. They are given the language to be deceptive, and the bounce around the department is designed to confuse and exhaust. Yeh it takes a while to believe that this is the reality of people chewing up tax payers dollars,

Yeh I started politely, 'I find it hard to believe', and 2 months later, today I finally made it to, 'That's a load of old tosh, that's a lie. I don't believe you.' I am pleased to say that swearing has to date been avoided, but just because I haven't written the bad bad words down, it doesn't mean I haven't said some pretty blue sentences out loud to about anyone who will listen.

Well that won't surprise anyone who knows me even a little.

Yep it's been a long week.
TMR is full of utter BULLSHIT! and the people I am in contact with via email are FUCKING LIARS.

There it's out there! And I suppose if they fancy suing me for defamation, they would have to spend sometime proving that they tell the truth, but I reckon they would be pensioned out long before that could happen.

I have lots of evidence of their lies and misrepresentations. Bring it on I reckon.
Posted by Unknown at 18:16